The “Fat-Adapted” Metabolic State is the foundation of OFM. The  term used in science, research and academia is Nutritional Ketosis (NK) or “Keto-adaptation and should not be mistaken for Starvation Ketosis or Ketoacidosis. NK is actually a proxy for beta-oxidation the real principle pathway of fat metabolism. This is because ketones are easily measured in the blood stream. Via the Metabolic Reset (MR) the human body makes a profound shift toward burning “fat as fuel” without catabolizing muscle protein for glucose as is the case for Starvation Ketosis (OFM athletes actually gain lean body mass!).

This is a shift back to the energy source our bodies are designed to use for aerobic activities. When in a fat-adapted metabolic state the body actually prefers to metabolize saturated fats, does so easily, and, at much higher rates than are considered possible by conventional standards of sports physiology. So now, rather than accumulate in the body, saturated fats become the most potent aerobic energy source.

To achieve this metabolic state the athlete has to sharply restrict carbohydrate consumption, principally concentrated forms of carbohydrates during the MR. Many of the staple foods athletes use need to be eliminated at this phase of the OFM program in order to induce The “Fat Adapted” Metabolic State. This is a simplistic answer so, to make this work, the actual execution of effective carb restriction is via the MR.  It is NOT recommended one attempt to reset when “in-season” or when training volume is high. The ideal time is in the off-season or immediately after an endurance event scaled for the individual. This can range from a modest 3-4 hour hike to an IronMan or Ultra.

Here are some common issues:

The next Step is the “Nutrition NOT Calories” 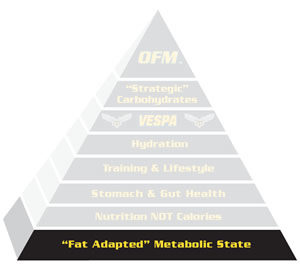